What is an LM80 report & how can it help to evaluate LEDs?

The question for electrical contractors, wholesalers, energy project companies, designers and consultants is how to assess and compare luminaire quality and communicate the findings to end customers.

Here at enLighten, we are aware of low performing imitations of enLighten's patented Chamaeleon light and encourage scrutiny via LM-80 and TM-21 reports to assist lighting professionals easily evaluate and compare LED components within a luminaire. They are also an important part of the equation in assessing the complete LED luminaire's performance or reliability. 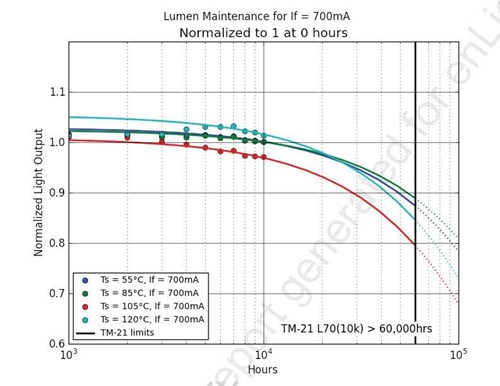 LM-80 is a standardised testing method for measuring the lumen depreciation of LED modules or chips over a period of time and under certain set conditions. Before the advent of LM-80, LED component manufacturers each reported lumen maintenance data using their own disparate and varied systems.

LM-80 is one part of a larger puzzle of overall LED luminaire performance or reliability. Other components, including the LED optical system, heat sink, LED drivers and luminaire housing, should also be taken into consideration to form a full picture of an LED luminaire' s projected useable life.

Is the LED chip's lifetime rating the same as the luminaire's lifetime?

No, but how quickly the light output of the LED chip will depreciate will certainly help to determine the useful lifetime of the product (luminaire) in which the LED will be used.

Once an LED chip has reached the minimum 6,000 required test hours for LM-80, a lifetime extrapolation, known as TM-21, is applied to the test data. TM-21 is the internationally recognised method for projecting lumen degradation of LEDs beyond the LM-80 test data.

For example, as a customer of Lumileds LUXEON LED range, we can claim a 60,000-hour-or-more lifetime for our Chamaeleon III, Zorro, Medici, Cincinatti, Tauro Black and Tauro Eco luminaires. This claim is supported by the 6,000-10,000 hour LM-80 test results of the component LUXEON LEDs, extrapolated by TM-21.

When will an LM-80 test report be used?

Steve has 25 years experience in facilities management and commercial property in Australia and overseas. Steve's expertise in building services and his understanding of the needs of landlords and tenants will assist our clients in maximising cost reductions, energy savings and lower greenhouse gas emissions. Steve has a Masters degree in Business and Technology.