Energy efficiency should not devalue a major public asset 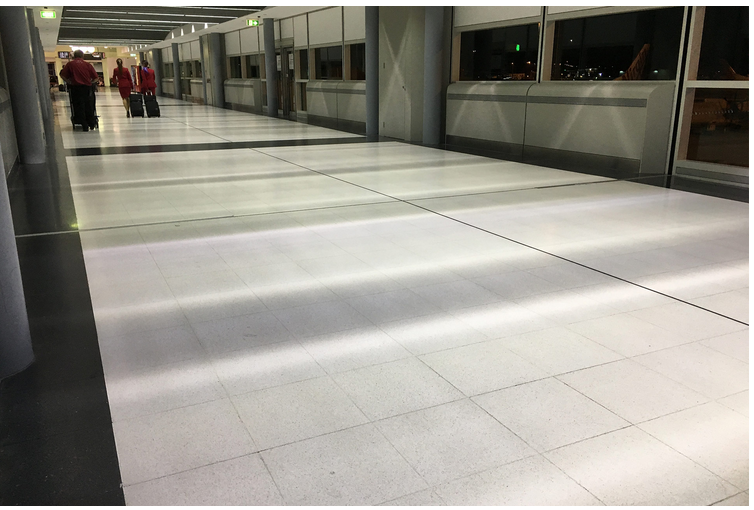 Instead of an evenly lit corridor, this Zebra crossing effect causing discomfort and possibly even confusion in the mind of the travellers, is exactly what could go wrong when a fluorescent fitting is retrofitted with an LED tube.

Under the guise of energy efficiency someone had sold the concept of an LED tube. Mounting an LED tube into a fixture designed for fluorescent light created this appalling outcome.

We all know first impressions are important. For a new visitor to a city, an airport represents that first impression and that is why so much money is spent making them both aesthetically attractive as well as functional.

As an electrical engineer & lighting designer I love airports. These mega structures with high vaulted ceilings and large open spaces represent many engineering challenges, including lighting.

I was recently transiting through a major Australian airport and my attention was drawn to a zebra like pattern on the floor while walking towards my boarding gate. I knew that this pattern was caused by the lighting and was intrigued to understand what was going on.

It was no surprise to see the cause was the curse of the energy efficient lighting upgrade; the LED tube.

The original designer would have taken great care to space the lighting fixtures to provide an even distribution of light. The lights used during that time would have been designed to accommodate a fluorescent tube.

Under the guise of energy efficiency someone had sold the concept of an LED tube. Mounting an LED tube into a fixture designed for fluorescent light created this appalling outcome.

Instead of an evenly lit corridor, the result is continuous bright and dark patches on the floor, creating a Zebra crossing effect, causing discomfort and possibly even confusion in the mind of the travellers.

The reason this problem occurs comes to the very fundamentals of light distribution. A fluorescent tube is omnidirectional, that is, it emits lights from a 360° surface. On the contrary, LED tubes emit light from the bottom half only i.e. 180°. How does this make a difference?

Luminaires, like the one in question were made with special parabolic reflectors and anti-glare louvres to redirect light coming from the top half of the fluorescent tube to reflect at wider angles than the direct light coming from the bottom half of the luminaires. An understanding of how incident rays of light at various points on a reflector surface behave, is fundamental to the design of such luminaires, light distribution and their light output ratios.

When an LED tube (with 180° light distribution) is deployed in the same luminaire, it only has downward throw of light and hence the reflector system of the luminaire is not used. As the LED tube is supposed to give the same lumen output as that of a fluorescent tube, it results in a bright patch of light directly under the luminaire and no light a few meters away from it.

In fact, the reflector system is now a bane for this newly retrofitted fitting, because the glare cut-off angles also restrict the wider distribution of even the downward light output of the LED tube, accentuating the striping effect on the floor.

There are many lighting options that would have delivered a far superior result whilst still saving energy.

Last year I wrote a widely-read article on why a direct fluorescent to LED tube replacement comes with significant performance and safety risks. It was a modest attempt to enLighten the consumer on what could go wrong when a fluorescent fitting is retrofitted with an LED tube. What I observed at the airport is a live example of the same.

Lighting design is a technical/professional service and reputable lighting companies can offer these services to ensure that you achieve your dual objectives of saving money whilst maintaining the amenity of your facility.

Surya is an Electrical & Electronics Engineer and holds a Master of Design Science (Illumination Design & Building Services) from The University of Sydney. Experienced in preparing electrical designs and delivering lighting solutions across retail, commercial, residential and industrial sectors; Surya has also conducted detailed lighting & energy audits as per IPMVP